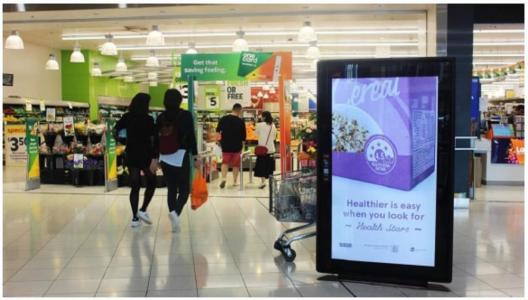 A new report has just been published by the Health Promotion Agency (HPA) on the monitoring and evaluation of the Health Star Rating (HSR) consumer education campaign.

The HSR is a voluntary front-of-pack labelling system developed for use in New Zealand and Australia to assist shoppers to make decisions between similar packaged foods, based on their overall nutritional value.

The HSR system is a joint initiative between Australian state and territory governments and the New Zealand Government. It was developed in collaboration with food industry, public health and consumer groups.

HPA has worked with the Ministry for Primary Industries and the Ministry of Health to roll out a consumer awareness campaign, which began in March 2016 and ran until June 2018. It focused on raising consumer awareness, recognition and ease of use. It was part of a wider programme of work to establish the HSR in New Zealand. The target audience was shoppers in households with at least one child under the age of 14 years, with an emphasis on Māori, Pacific and low income families. Later phases of the campaign aimed to improve awareness that the HSR was government backed and therefore increase trust in the system.

HPA commissioned Colmar Brunton to conduct a baseline survey on the HSR in 2015, with two follow-up waves in 2016 and 2018 to monitor consumers’ awareness, understanding and correct use of the HSR.

The consumer campaign had two periods of activity and used a ‘path-to-purchase’ strategy to help inform shoppers at key-decision making moments. The first period in 2016 used a mix of video-on-demand advertisements, cinema advertisements, instore promotion and out-of-home advertising through Adshels. The second in 2017/18 used broadcast television advertising, instore promotion and out-of-home advertising through digital displays near supermarkets.

The advertisements featured cereal boxes, bought to life, contemplating the features and benefits of the HSR system. They were widely liked by audiences, with 73% of shoppers in the general population feeling the ads were easy to understand (vs. 66% in 2016). This is broadly consistent across all priority groups: low income (73%), Māori (72%) and Pacific (63%)[1].

Impact of the campaign

Overall recognition of the campaign advertising was higher in 2018 than in 2016, 45% compared to 12%. This is likely due to the different media mix used in the two campaigns.

In measuring the campaign’s impact in 2018, increases were seen in awareness, use, trust, ease of use and understanding of HSR:

In 2018, unprompted and prompted awareness of the HSR had increased significantly for shoppers in the general population, and for all priority groups since the 2015 baseline measure. Three quarters of shoppers now recognise the HSR when prompted. This has increased from four in ten in 2015.

The main barrier for general population shoppers to use the HSR in the future continues to be the belief that other nutrition information is more important than the HSR (49%).

The biggest barriers to HSR future use among Māori and Pacific shoppers are that food purchase decisions are based on price (44% and 46% respectively), and what the family will eat (33% and 37% respectively).

Trust and confidence have remained consistent since 2015 with 40% of shoppers in the general population saying they trust the HSR and 47% feel confident using the HSR to choose packaged foods.

Perceptions around ease of use in the HSR have improved since 2015. Over six in ten agree:

Self-reported use of the HSR has increased across all groups since the baseline:

The research indicates the campaign, alongside a greater presence on packaging, has raised the profile and use of the HSR among the general population and the three priority groups since the 2015 baseline. The reach of the 2018 advertising campaign was much stronger than 2016, and the perceptions of the 2018 advertising were more favourable than in 2016. This has helped to double awareness of the HSR from 38% to 76%.

The campaign is also supporting understanding of how the HSR works, including the fundamental principle that the more stars a product has the healthier it is. Further positive impacts of the campaign include supporting trust levels in the HSR, with those who have seen the campaign more likely to express trust in the system. Overall trust has remained consistent, but without the campaign it may have been undermined due to negative media coverage of the HSR.

Finally the campaign has supported increased use of the HSR. Self-reported use has increased across all of the groups surveyed, including the general population, as well as low income, Māori and Pacific shoppers with children aged under 14. In addition, young shoppers aged 18 to 29 years are more likely than average to make use of the HSR.

The full report is now available online on the HPA website, the reference and link are given below.

[1] Pacific shoppers were recruited by intercepts rather than an online survey so results are not directly comparable to other groups.