In a similar way to protein being made up of amino acids, carbohydrates consist of building blocks called ‘saccharides or ‘sugars’. Glucose, a common example of the simplest type of sugar, is a monosaccharide, together with fructose, found in fruit. Two monosaccharides joined together are called disaccharides, the most common being sucrose or ‘white cane sugar’ as we know it. Another example is lactose, found in milk. When large numbers of saccharides are joined together, they form polysaccharides and are found in the foods we commonly think of as ‘carbohydrates’, e.g. bread, potatoes and pasta.

Dietary fibre belongs to the carbohydrate group but is not digestible and doesn’t provide you with energy. Fibre has important roles in helping you feel full after a meal, in adding bulk to stools, preventing constipation and generally for gut health. Fibre is only found in plant-based foods such as whole grains, lentils and fruit and vegetables.

Why are carbohydrates so important?

Carbohydrates are the main providers of energy in our diet. Every cell, including the brain, requires a constant supply of glucose as fuel, most of which is provided by the carbohydrates in food and drink. 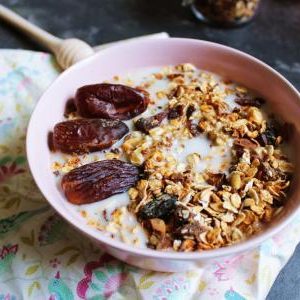 How much carbohydrate do we need?

The Ministry of Health recommends 50-55% of an adult’s energy intake comes from carbohydrates, but less than half of adult Kiwis achieve this recommendation. Eating at least 6 servings of bread and cereals (preferably wholegrain i.e. not refined) and 5 servings of fruit and vegetables each day will help you reach the recommended level. Read our healthy eating for all ages section for information on your age group.

Can carbohydrates help with weight loss?

For those wanting to lose weight, low GI foods as part of a balanced diet may be helpful. The carbohydrate in low GI foods is digested slowly, making you feel fuller for longer. Fad diets that reduce the intake of carbohydrates claim rapid weight loss, but such losses are unlikely to be maintained long term.