The current coronavirus pandemic has brought into sharp focus the reliance of countries, including New Zealand, on trade including tourism.  Food, the food supply and the food system underpin the New Zealand economy, and the health of New Zealand people. Almost half the total land area of New Zealand is used for agriculture or horticulture yet we are one of the most malnourished countries in the world. Malnourishment includes obesity and overweight (>66%), underweight (2%), food insecurity (40%) and hidden hunger (unknown). Hidden hunger is the consumption of food deficient in essential vitamins and minerals and may include protein. Two-thirds of New Zealand adults and children report not eating the recommended vegetable and fruit consumption of 5+ a day. A visual audit of the food available in supermarkets by shelf space reveals the imbalance in our food and beverage supply.

In New Zealand the disconnects between food production (Ministry of Primary Industries), the New Zealand economy (Ministry of Business, Innovation and Enterprise (MBIE)), food exports and imports (Ministry of Foreign Affairs and Trade), food safety (MBIE), food security (Ministry of Health ), food-based dietary guidelines (FBDG, MOH) and public health (MOH) and household income and food affordability mean that we need a cohesive food policy. New Zealand does not have food resilience or sovereignty and our dependence on other countries is clear.

It has been stated that New Zealand grows enough food to feed around 40 million people (Ian Proudfoot, KPMG, 2017) but it is not clear what the quality of that diet would be? Was this figure based on food energy, or did it focus on a particular food group? In order to answer this question I asked Statistics New Zealand what data they did have on food produced and consumed in New Zealand.  The most detailed data available was for food exports and imports.  Internal production, waste, foods such as grain to feed livestock and foods eaten were not recorded.

All exported and imported goods must be assigned a specific 10 digit code. Over the three years, 2016 to 2018, almost 2000 different foods were exported and 1800 foods imported. These foods were classified into food groups according to the guidelines or as discretionary foods. In anticipation of changes to the FBDG the number of servings/person/day were set at vegetables 5, fruit 2, grains 6, dairy 2.5 and protein foods (including red meat, seafood, beans and nuts) 2.5.  Assumptions were made, based on the NZ food composition tables, about serving size and macronutrient composition so that numbers of servings and food energy could be determined. 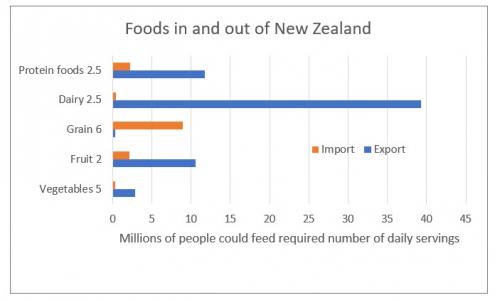 In addition, for discretionary foods, 217 million serves (mainly butter) were exported and 330 million serves (mainly sugar) were imported each day.  Enough food energy (including discretionary foods) was exported to meet the energy requirements of 20 million people and imported food energy would feed 10 million. Three quarters of the energy of exported food was derived from fat and protein and two thirds of imported food were carbohydrate. New Zealand has a population of 4.5 million aged over 5 years.  Imported carbohydrate foods included the equivalent of 300g each of grains (mainly refined and sugar)/NZ person/day.  Food imported included 33g dry rice and half a banana/NZ person/day. Most of the imported grains, rice and pasta were refined so this brings into question where can NZ people get the required cereal fibre intake?

Dietary advice has historically been based on the accepted relationships between food and health. Now we have to think more long term about the health of the planet and the stability of the food system.  Most agree that foods should be minimally processed, minimally packaged and where possible locally produced.  Food preservation and storage techniques help smooth seasonal fluctuations. Perhaps the coronavirus might help households and societies consider better how to be prepared to cope with disasters and borders closing.  What foods are in the emergency kit of the nation and how can those foods go to the right places to look after the most vulnerable in society?

Affordable and readily available food is a human right. We need a national food strategy to be sure that New Zealanders are fed properly first. Then we can help others.